Perched on the edge of the Everglades, golfers at Bonaventure Country Club's East Course face both wildlife and water

WESTON, Fla. Bonaventure Country Club is perched dead on the edge of the vast Everglades, the last vestige of civilization before you leave greater Fort Lauderdale and enter the no-man's wetlands on your way to Naples and southwest Florida.

Joe Lee has always liked his waterfalls, and no. 3 on Bonaventure East was one of his earlier ones.
«

Designed by Joe Lee, this classic layout has been ranked as one of Florida's top 10. The golf course weaves through swaying palms and towering hardwoods. To add an element of challenge, there are expansive bunkers strategically placed along the greensides.

So, despite the fact it's hard by Alligator Alley, the two resort golf courses don't have the cramped development so much of South Florida golf suffers from. You can actually get a sense of the great swamp here; the course has the usual assortment of alligators, herons, iguanas and hawks, who have the luxury of alternating between fancy living and swamp survival.

"You get Northern visitors down here and they see alligators, iguanas and hawks in one day," Director of Golf Chris Baetzel said. "They think that's pretty cool."

Bonaventure Country Club's East Course is by far the more difficult of the two, at slightly more than 7,000 yards and replete with water hazards and target bunkers. The course was built in 1970 - the original ownership group included former talk show host Mike Douglas - and has been through several ownership changes since, the last of whom let the course go.

The current owners are five partners who basically grew up together: brothers Keith and Ed Clougherty, Mark Bernstein, Mike Fernandez and Baetzel, who also serves as the director of golf.

"Four guys in their early 40s who hung out in bars together in their 20s," said Baetzel, who moved to Florida from Rhode Island.

The group spent $2 million in renovations and continues to spruce up the old -- for Florida -- course. It shows, because the course is in excellent condition in spite of the torrential rains this part of Florida has been burdened with.

It's a Joe Lee design and the first thing most people gape at is the "waterfall hole," the par-3, no. 3. The one-shotter is over a cascading waterfall to an elevated green, more visually intimidating than it is difficult. Lee, an under-rated course architect, has always liked his waterfalls, and this is one of his earlier ones.

Bonaventure Country Club's East Course has a slope rating of 132 and is sometimes referred to as the "Green Monster." That's stretching it a bit, but the course does have a lot of bite, especially from the back tees. There are more than the usual risk-reward options; there always seems to be a long stretch of water that taunts you and dares you to try and hit over.

No. 4 is a 436-yard par-4 into the prevailing winds, where the cars rush by on Alligator Alley. No. 5 has an island fairway with big water left and water in front of the green. Look for red-tail hawks and burrowing owls here. No. 7 wraps around a lake to the right. It's a par-5 reachable in two if you can carry the water - this is where the big, male gator likes to lurk.

"I like that course because you can hit your driver nearly every hole, though there are a few where you probably shouldn't," said Eric McLaughlin, a low-handicapper from North Georgia. "I like it when a hole dares me to hit over trouble; I usually hit it better when I have something to carry."

The golf course has a nice closing stretch: No. 15 has water all the way down the left and only those with hairy forearms dare to try it at 360 yards - hey, it's been done. The 16th is a 581-yard par-5, No. 17 is a tough, little 177-yard par-3 and the finishing hole requires two shots over water to a two-tiered green.

The course plays harder than it looks, because it seems everything slopes to the water. All the kicks here seem to end up wet.

Service at the club is excellent, especially starter Mike Weaver, the son of Earl, the former Baltimore Orioles manager. Green fees at the semi-private club are very reasonable. 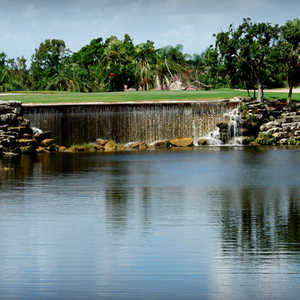 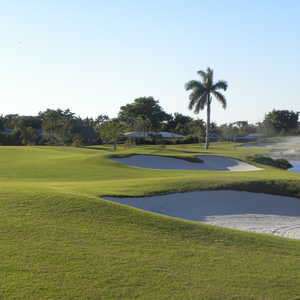 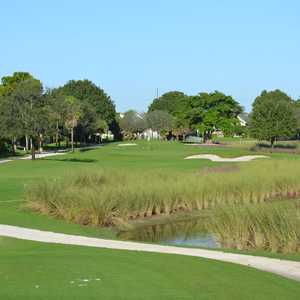