Florida fun: Five things you should know about golf in the Destin/Panama City area

DESTIN, Fla. -- If you're considering a golf vacation in Florida, you've probably already considered the Orlando, Miami or even St. Augustine.

Sandestin Golf & Beach Resort has been a big catalyst in the golf explosion on the Emerald Coast.
«

But if you're looking for a little different Florida golf experience, you might want to consider the Panama City/Destin area on the northwest coast.

Known as the Emerald Coast, this region of Florida differs from the rest of the state in several important ways. Side benefits include the whitest beaches in America and Southern hospitality and cooking.

The golf scene has come a long way in the last 30 years as well. Here are five things you should know about the golf in the Destin/Panama City area before you go:

Thirty years ago, there wasn't much golf in the area, just a few private clubs and daily fees. But as the secret of the pristine white beaches and emerald blue waters of the Gulf of Mexico started to spread, visitors started flocking to this lesser known area of Florida.

Now there are high-rise condo units and high-end hotels everywhere, and along long with them, some mighty fine golf courses. In fact, there are dozens of them, ranging from budget to some of the best golf in Florida.

The courses are also designed by some of the bigger names in the business, such as Camp Creek Golf Club(Tom Fazio), Burnt Pine (Rees Jones), The Raven (Robert Trent Jones Jr.), Emerald Bay Golf Club (Bob Cupp) and Bay Point (Jack Nicklaus). And around the courses are plenty of really good restaurants and other things to do.

Unlike south Florida or even central Florida, winter isn't the high season on the Emerald Coast. It just isn't as warm there, but it doesn't mean it's not a great time to play.

There are plenty of warm days, but there are some cold ones, too. Average highs in January are in the low 60s, but the 70s aren't that uncommon. And because it's not prime season, rates -- both on courses and accommodations -- tend to be a little lower.

In fact, summer is really the prime season, not because of the golf but because of the hordes of families that vacation there. Also, most of the courses don't overseed their fairways or greens, making for better transition into the spring, which along with fall, are really primetime for golf on the northwest coast.

Being on the coast of the Gulf of Mexico, it's no surprise that the courses have plenty of water, but it isn't the ocean.

For example, at Sandestin Golf & Beach Resort's Links Course, it seems like just about every hole is on water of some kind. The predominant body of water in play here is Choctawhatchee Bay.

The ninth hole, a par 5 that crosses hazards three times, gives you plenty of that. And along the way are some of the best views on the Emerald Coast of Florida. Beyond that, however, there are plenty of lakes and marshes on the links. In fact, there's water on 14 holes, not unusual for courses in the area.

Learn to play a knock-down

It may not be Scotland, Ireland or Hawaii, but the Emerald Coast of Florida is seaside golf, which means it's going to be windy most of the time, often very windy.

That means it's a good idea to practice your knock-down shots before your round to keep it out of the wind. Don't have much experience with that shot? Not to worry. Just take an extra club or two and swing easy, but you'll definitely want to get a feel for that before you play.

Of course, when you get a downwind tee shot, you're probably going to want to tee it high and let it fly. There's nothing like hitting it 300 yards when the occasion calls for it.

If you really want to get the most out of a golf vacation on the Emerald Coast, booking a golf package is probably your best bet, and there's plenty to choose from.

The largest resort is the 2,400-acre Sandestin Golf & Beach Resort, which offers hundreds of rooms ranging from oceanside condos to the magnificent Grand Sandestin Hotel, which features a Southern-inspired architectural design and lushly landscaped gardens. The resort also offers water sports, biking, tennis, hiking, a marina and the Village of Baytowne Wharf, where you'll find restaurants, shops, nightclubs and all sorts of entertainment in a festive atmosphere.

The Water Color Inn and Resort, just a few miles down the coast, is next to where the "The Truman Show" was filmed. And, yes, the community, with its perfect houses and condos minutes from the beach, looks like something out of the movies. Water Color offers golf at three terrific golf courses, including Camp Creek and the private Shark's Tooth, designed by Greg Norman.

Other resorts include the Seascape Golf, Tennis & Beach Resort in Destin as well as the Wyndham Bay Point Resort in Panama City, which offers 36 holes of championship golf next to St. Andrews Bay and the Grand Lagoon. 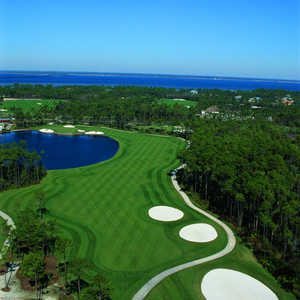 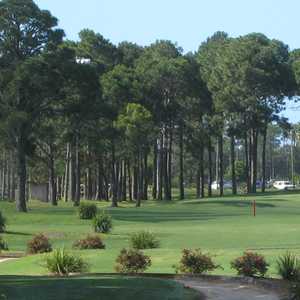