CORAL SPRINGS, Fla. - Funny how wind is the golf course designer's best friend and the golfer's worst enemy. Or is it? No, I guess it isn't.

The fourth hole at Heron Bay Golf Club in Coral Springs is a long par 5.
«

But, it's interesting the role wind plays in architecture. One of the criticisms of golf design in general is that it's man's attempt to control nature. You can crank up the bulldozers, fill in lakes, create lakes, mound up fairways and elevate greens and tee boxes in order to make a piece of nature's work conform to a game invented by man.

But, you can't do anything about the wind except made an educated guess.

So when you play the Heron Bay Golf Club near Fort Lauderdale: Let the wind blow, and let her rip here on the willowy edge of the Everglades, be ready to bring your red pencil for going below par or your black one for going way above it - depending on nature's whim, not the architect's.

"This course was designed to be played in wind," said Head Professional Shawn McCauley. "If the wind isn't blowing, it's an easy course."

And when it does blow, it can be -- well, a female dog. The scale and openness of the course, combined with the flat terrain on the edge of the great, mostly tree-less swamp, gives the wind room to built up speed, similar to what hurricanes do over the warm Gulf of Mexico.

It isn't that the course is completely defenseless without wind. In fact, despite what McCauley said, it can still be very difficult if you don't hit it where you aim it, and who the hell can, all the time?

Architect Mark McCumber, a Florida native, must have been steamed he had to build this course so far from the beach, so he brought it out here with him. These bunkers are huge. They are many. They are legion.

"Ninety-eight of them on the course," McCauley said, just a tad too boastful. "Actually, we used to have 103, but we combined some of them."

This isn't Robert Trent Jones' spare, artful bunkering -- these Heron Bay babies are everywhere: left, right, middle, short and long. I think I stepped in one getting out of the car. If you make it through a round here without hitting in the sand at least once, your portrait should be hanging with Snead, Hogan and Bobby Jones in some hallowed hall somewhere.

Heron Bay Golf Club is a good play, wind or no wind. You can whale away: It has very wide fairways and generous landing areas, if you can avoid the bunkers.

The greens are also big, for the most part, and fairly flat with only subtle undulation. But, though they are flat, you have to play the angles, find a spot that allows the best entry - otherwise you may be hitting over a lot of sand with little to work with.

"I really don't think that course is that hard," said Eddie Burroughs, a mid-handicapper who said he has played most of the greater Fort Lauderdale golf courses. "But then, I like to play in the mornings, when the wind doesn't really have a chance to get started."

The course is on the edge of the Everglades, as advertised, but you'd never know it. Heron Bay Golf Club is ringed with homes but they are nicely set back, most of them over creeks and canals. Still, they block what may be views of the great swamp. 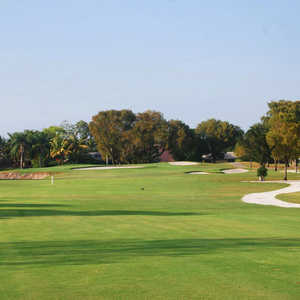 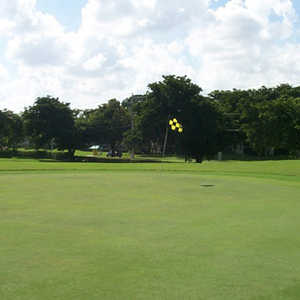 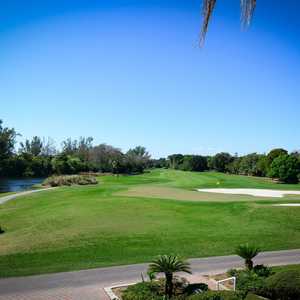