(based on 7 reviews)
See all reviews | Submit your rating

Carved from forests of towering oaks and pines, Old Corkscrew Golf Club exhibits all of the superior characteristics that define Nicklaus Signature courses. The absence of houses around the golf course adds to the secluded and peaceful feel that is provided by the dense thickets of trees that surround it.

Everyone embraces the notion that it's a players' club, from the staff to the members. Even the yardage book is called "The Players' Book."

In the book, managing partner Franz Rosinus quotes Psalm 96:12 from the Bible. And some players better say a prayer before stepping on to the first tee at Old Corkscrew.

It's sort of a badge of honor to get humbled by a 7,393-yard golf course that has taken bites out of Stewart Cink and even designer Jack Nicklaus. Cink has played the golf course several times and never broken par.

The semiprivate Nicklaus design, halfway between Fort Myers and Naples, will probably kick your tail too. Just don't take it personally. Most players leave with a smile and return.

Even in a soft economy, situated in one of the most densely populated golf markets in the country, the golf course has increased its rounds of play every year since opening in 2007. Mark Iwinski, manager of golf operations at Old Corkscrew, said it reached roughly 30,000 rounds in 2010, with 32,000 projected in 2011.

"Even some of the top (Florida) courses are plain jane, plain vanilla," Iwinski said. "This is a championship course with U.S. Open and U.S. Amateur qualifiers. It's not everyone's cup of tea. But when you get your ego bruised, you want to come back and learn the nuances of this place."

No houses sit on Old Corkscrew, another treat for players used to subdivision golf in southwest Florida. It's just you and 275 forested acres of mature pines, oaks, cypress trees and wetlands. Environmental restrictions helped the golf course earn status as a Certified Audubon International Silver Signature Sanctuary from Audubon International.

The layout is daring and thought-provoking. It was originally set to be a high-end private club called The Retreat, run by the Bonita Bay Group, but the golf course never opened as planned. In stepped partners Rosinus, Richard Cray and Scott Westlake to revive the venue.

Old Corkscrew can be brutally tough, yet it remains fair, with bailout areas and few forced carries. The only forced carries, in fact, are the angles players decide to challenge. If you don't want to attempt that 200-yard carry to a green that juts into a pond on the 450-yard fifth hole, go ahead and bunt it down the fairway for a conservative shot at par.

A bogey is sure better than the 9 Nicklaus recorded here at the club's grand opening.

The golf course plays hard-to-get all day. Not only do you need to calculate shots but also where to miss. Players should step cautiously around Old Corkscrew. Don't slash blindly and hope for a good result. Tight lies from the closely mowed fairway require crisp striking of the golf ball.

"The beauty of this course is it makes you think more," Florida resident Ned Solomon said after a recent round. "You have to focus more. You get a minute error, and you're in trouble."

Old Corkscrew G.C. has softened slightly over the years. Danger zones along some fairways were cleared of scrub and underbrush. Previously shaven hillsides -- like the par-5 third -– now grow free. This added rough catches errant balls that once rolled back into the water, allowing the chance for a miraculous escape with a good short game.

The greens are borderline controversial, considering their speed, wild undulations and hidden breaks. The most notorious offender is the plateau green at the 445-yard 14th hole. The putting surface slopes like a ski hill from back to front. It's common to see putts to front flag positions roll off the green and finish 30 yards below in the fairway.

"If you learn to putt on these greens, you can go anywhere," Solomon said.

Thankfully, bad scores at No. 14 can be negated by good fortunes at No. 16, a drivable hole of 315 yard from the blue tees.

Iwinski said every time players gripe that Old Corkscrew is too tough, he sends them to the restroom of the small, cozy clubhouse. Hanging on the bulletin board, an article details the course-record 69 shot by 14-year-old Domenico Geminiani in February 2010. Geminiani later debuted as the youngest player to earn a start on the European Tour. Even local pros Derek Lamely and George McNeil Jr., winners on the PGA Tour, have failed to score that low from the tips at Old Corkscrew.

"That (score) is unheard of out here," Iwinski said.

Plans are in the works to build a larger, full-service clubhouse. The Mike Calbot International Golf Studio and Triad Golf Schools are run by Calbot, a renowned trick-shot artist who has worked with pros from every major tour.

Old Corkscrew provided the most fun I've had playing golf in Florida in a long time. The layout is dynamite. Hero shots come standard. It's a golf course that quickly exposes your weaknesses and worst fears -- easily the best public-access facility in southwest Florida. 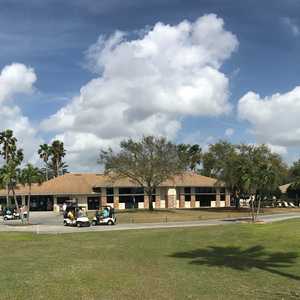 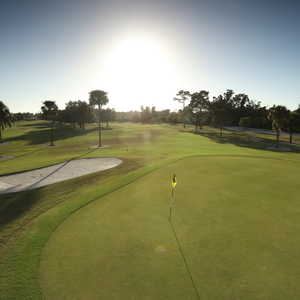