KEY BISCAYNE, Fla. — You don't find many governors playing municipal golf courses, unless it's for ceremony or politics, but you will at the Crandon Park Golf Course on Key Biscayne.

Crandon Park Golf Course was designed by Robert Von Hagge and Bruce Devlin, with a renovation in 1993.
«

Crandon Golf Club at Key Biscayne is only 10 minutes from Miami but it will feel as though you've been transported to a faraway tropical island. The course sprawls across a scenic landscape covered with mangrove forests and brilliantly colored foliage.

There was former Florida Gov. Jeb Bush emerging from his car in the dawn semi-darkness, dressed and eager for 18. Governor Bush, like the rest of his family, has a reputation for playing fast. He likes to show up early and the city employees have a rule when he visits, especially when it's still close to dark outside, so the pace of play befits a politician of his stature.

"He'd probably tell you this is one of his favorite courses," said Carlos McKeon, director of golf for Miami-Dade's five munis. "We have a rule when a governor plays: If you can't see your ball, you just take a drop."

Crandon Park is that kind of muni, hosting the public from the governor on down. You can play here in the summer, which is essentially seven months long here, for $30 after 10 a.m. During the high season, it's $75 for Florida residents.

It's an excellent, affordable golf course in a beautiful setting, and you don't have to be a President's brother to play it.

"We're proud of that," McKeon said.

He's also proud of the course, as well he should be. Crandon Park is one of the best munis in the state, maybe in the country, with an upscale clubhouse and a great design by Robert Von Hagge and Bruce Devlin.

The first thing you may notice might be the size of the tee boxes. They're huge. I mean, really, really big. The tee box on No. 18 is about 150 yards long, unfolding through a chute of trees. From the back tees, it's nearly 250 yards just to reach the fairway.

It gives the course the option to move the tee markers around to keep the grass pristine, and to stretch out the course to more than 7,200 yards.

"There's more tee space here than anywhere in the world," McKeon said. "I think that was the genius of Devlin."

McKeon has done his own bit of work on the tees, building new ones and moving them around to make the course more playable to the average player.

The second thing you can't help but notice is the setting itself. It's a pristine island environment, with seven saltwater lakes and views of Biscayne Bay and the Miami skyline. The course is dotted with palms, mangrove and other exotic, tropical growth and has an assortment of exotic wildlife, like iguanas scuttling around the grounds and climbing trees and — get this — crocodiles.

Don't fret — these are American crocs, not as aggressive as their African cousins.

This is one of the best deals in south Florida, when you combine price and the quality of the experience. Crandon Park can be a handful, especially if you play it from the back tees, with the near-constant wind that comes sweeping over the unprotected layout.

Opened in 1972, Devlin oversaw a $1.5 million renovation in '93, including rebuilding 17 of the 18 greens. They also made some bunkers bigger and some greens smaller, adding mounds around some of them.

The facility lost the Senior PGA Tour tournament it hosted for 17 years, where legends like Lee Trevino, Chi Chi Rodriguez, Gary Player and Ray Floyd played, two years ago, but is actively trying to get another. It deserves one.

The Ritz Carlton on Key Biscayne is Miami's only AAA Five Diamond resort, and it's a beauty, stuck out on the end of what they call here an "island paradise." It's only about 10 minutes from downtown Miami, but it seems a world away. It's like having all the advantages of Miami without the horrible traffic. The resort is also just a few minutes from Crandon Park.

The resort overlooks the bay and the ocean, and has pretty much everything you would expect from a five-diamond resort, from the 20,000 square foot spa to excellent restaurants.

It also has one of the largest tennis complexes of any Ritz-Carlton in the world.

The resort is a 13-story, 402-room facility on a 12-acre stretch of oceanfront and bordered by 1,200 feet of beach, named one of the top-10 in the U.S. Beach activities include kayaking, windsurfing and sailing on catamarans, or just lazing the day away under a palm tree. 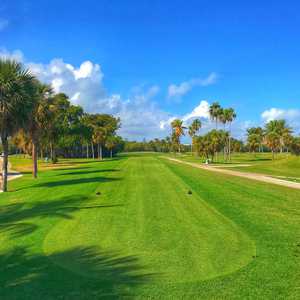 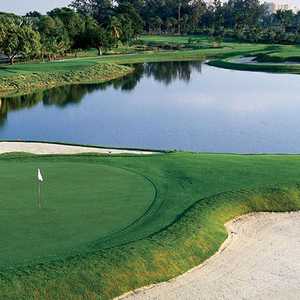 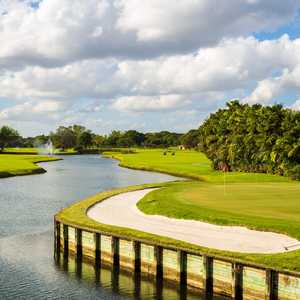