LAKE CITY, Fla. - The Southern Oaks Golf Club couldn't be in a better location for yanking snowbirds off the interstate. It's a mis-hit 5-iron off I-75 and not far from the great confluence of I-75 and I-10 - the two main arteries that bring in Yankees speeding down from up North and cowboys loping in from out West.

In fact, a sign by the interstate serves as a reminder that there's a golf course here - "Come on down, ya'll." And some of the holes are so close to the big highway, you might think some of the tourists parked their car and jumped the fence; you can hear the dull roar of thousands of cars hell-bent for Orlando and Miami.

But, the course soon turns away from the maddening car crowd and meanders through some nice, woodsy areas, hillier than much of the surrounding terrain. Despite the interstate, you can get into some woods quick here, like most of north central Florida. You can turn off the interstate and be in Jethro's back yard in two minutes.

"I see a gator just about every time I come out here," Southern Oaks member John Livingston said. "I've also seen deer, turkeys and a lot of other stuff."

The course has been around since 1970 and has hosted numerous qualifying events - from the PGA and PGA Senior Tours to the Women's Senior Tour. The Ben Hogan Tour, later to become the Nationwide Tour, rolled through here for a few years and used the back tees, making the course right around 7,000 yards from the tips, though it isn't on the yardage books.

Southern Oaks - inspired by the North Carolina sandhills, reads the literature - was designed by Willard Byrd, who did a number of courses in the Carolinas. That influence is seen here.

"Willard worked for Ellis Maples and Ellis was an old, traditional architect," Head Professional Harold Hoover said. "He used what was there. He didn't go in with big bulldozers and move dirt around everywhere. He just took the land like it was and used a little bit of imagination. Willard does the same thing."

The course has a slope rating of 135, so it isn't a pushover, especially from the back tees. It has some nice elevation changes and throws a variety of different looks, for being such a traditional course. The greens are a scaled-down, not-quite-so-punishing version of Pinehurst No. 2, where you can easily blow a putt by the hole and into the fringe.

"You get mounded greens. That's the old traditional style, called 'push- up' greens," Hoover said. "They just take the dirt out of the fairways that they shaped and build the greens from that. Wait 'til we cut the run-off areas."

There are a lot of risk-reward situations on the course, doglegs that can be cut and such. There are also some tough holes, like No. 10, a 459-yard dogleg left that has water top the left. There's a spare landing area and your second shot is over the water and uphill.

The course lives up to its name in terms of landscaping: it's replete with moss-draped live oaks and pine trees. In fact, you'll find yourself punching out bump-and-run shots with long irons a lot if you miss the fairways and land amongst the trees.

Like most courses in this part of the state, Southern Oaks suffered water damage from last year's hurricanes and several deluges this year. Some of the fairways have brown, bare patches, though the greens are in good shape.

Said Livingston: "Most of the courses around here have at least one or two holes that are bad."

Southern Oaks is a very good bet in this area, not exactly a hotbed for golf, with green fees at $40 for non-members and $13.75 for members at the semi-private course.

Like most medium-sized cities off the interstate, Lake City has a plethora of chain motels, from Best Western to Econo Lodges to Holiday Inns. The Rodeway Inn is right down the street from Southern Oaks and serves a continental breakfast. There are other options, like Quail Heights Country Club.

Lake City isn't what you'd call a gourmand's paradise, but it does have its share of great, southern barbecue joints, like Ken's, Derrick's, Newberry's Backyard Bar BQ in nearby Newberry and P.J.'s Barbecue in Jasper. 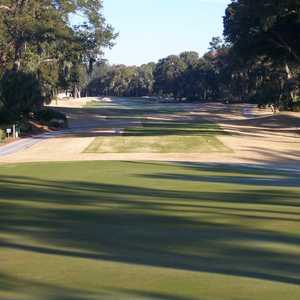