Royal Amelia in Fernandina Beach: A nice play except for the nasty price

FERNANDINA BEACH, Fla. -- Guests of the swank Amelia Island Plantation are getting access to another good golf course, but many of the regular folks of Fernandina Beach are losing one, for all intents and purposes.

Royal Amelia has Intracoastal Waterway views from the 18th green.
«

In September the resort, which had three courses, bought the Royal Amelia Golf Club, which sits on city-owned property. The sale opens up a number of exciting possibilities: course improvements such as a new irrigation system; a new clubhouse with dining facilities overlooking the Intracoastal Waterway.

But one unwelcome change has already come. While the Royal Amelia is still open to the public, green fees have been raised from the $55-$65 range to a whopping $130, what Plantation guests pay at the two resort courses open to them (the third is members-only) - and that will go up again, to $160, in March.

Royal Amelia Head Professional Barry Richardson acknowledged the club has lost some local trade due to the increase. No wonder - why pay that kind of money here when the superior Golf Club of North Hampton and its $60 green fees are just up the road in Yulee?

It isn't that Royal Amelia is a bad course -- not at all. It just isn't worth the doubled green fees, especially with the upgrades still in the planning stages.

It's an open, links-like layout, with several holes running parallel to the runways of the Fernandina Beach airport. It's a Tom Jackson design, and most of the fairways are wide and forgiving, but when the wind whips across its open expanse, those long par 5s into the wind can be nightmarish. There's a good mix of holes, with par 4s winding through live oaks, sabal palms and wax myrtles.

Alligator Creek runs through the mostly flat terrain, popping up here and there as a running obstacle. Royal Amelia may not have the fancy trimmings of other resort courses, but neither does it have any homes or high-rise condos looming over fairways, a rarity on a Florida golf course.

It's 6,843 yards from the back tees and, with a slope rating of 137, very playable from back there. The par 3s are excellent, especially No. 17, a brochure-like one-shotter to a peninsula green.

"What makes it challenging is the par 3s," Richardson said. "The par 3s and par 5s are very challenging."

Take No. 5, a 556-yard par 5 parallel to a runway that requires a long fade to reach in two; No. 13, another long par 5 adjacent to a landing strip with a hidden lake to the left of the green; or the closing hole, a 550-yarder with Alligator Creek guarding the green and a terrific view of the Intracoastal Waterway from the green.

Royal Amelia is a good course, made more so by the aesthetics of not having any homes along the course, but I would not recommend it at its current price. At its previous rate, it would have been a good play, but Fernandina Beach residents, and less deep-pocketed visitors, have plenty of better-priced options. 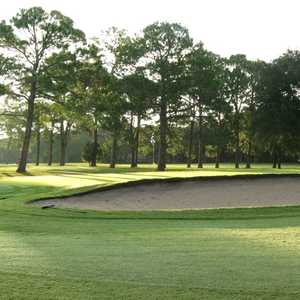 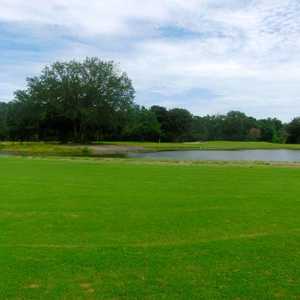