PUNTA GORDA, Fla. -- If you think about it, the golf swing is nothing like casting a fly or spinning rod. And the goals of the two sports are about as different as you can imagine: in golf, you lie about how low you went, in fishing you lie about how many you caught.

Golfing anglers have a choice in Punta Gorda: salt or freshwater fishing.
«

Yet, for some reason, the two sports converge, regarding their practitioners. Many golfers also seem to have a love for fishing, and vice versa. So whether you're looking for a good golf destination with a little fishing thrown in, or vice versa, there are plenty to choose from. One of the best, because of its geographical configuration, is Punta Gorda, Fla.

Basically, you could combine golf and fishing practically anywhere in Florida. The state has more than 1,000 golf courses and, being a peninsula, an ocean or gulf is never far away. Florida also has a myriad of freshwater rivers, lakes and streams, and the bass fishing is arguably the best in the country.

But there may not be many places that combine all three -- golf, freshwater and saltwater fishing, as well as Punta Gorda.

It's like weather, wildlife and some of the nation's great bodies of water met up in southwest Florida, between Tampa to the north and Fort Myers to the south, and said, "Hey, this looks like a good spot. Let's give them something to talk about."

It's all about Charlotte Harbor in Charlotte County. The harbor dominates the landscape, one of the biggest estuaries in the country fed by two freshwater rivers, the Peace and Myakka. You got your freshwater fishing and your saltwater fishing. Largemouth bass or tarpon today, sir?

Punta Gorda means "broad point" and dates back to the landing of Ponce de Leon, who probably feasted on the fish in and around Charlotte County. Those freshwater rivers converging with the Gulf form a 270 square mile cornucopia of fishing. There are 219 miles of shoreline, barrier islands and mangrove forests. Charlotte Harbor has an artificial reef system.

You can either use your own boat or go with a charter company to get out in the Gulf -- look for a company that offers "no fish, no pay" guarantees. Once in the Gulf, you'll be in an area that calls itself the "tarpon capital of the world," though Boca Grande, where tarpon anglers go from all over the world, is a little to the north.

Tarpon isn't the only saltwater species. You can go after grouper, mackerel, snapper, barracuda, cobia and shark. If you want to avoid the expense, you can also fish in passes, off bridges, in coves or bays. You can rent smaller boats and fish the flats or the rivers and creeks, in places like Tippecanoe bay, Alligator Creek, Catfish Creek, Placida Harbor or Stump Pass Beach State Park, where you'll be casting in a protected aquatic preserve.

Freshwater fishing is just as fertile. The Babcock/Webb Wildlife Management Area is 79,000 acres of ponds and lakes known for its bass fishing.

Some of the best fishing in the Myakka is its lower end, from where it empties into Charlotte Harbor about 25-30 miles up to where it meets Interstate 75. It's broad and shallow in that stretch, marked by a few well marked channels. It's a fairly remote area and has excellent winter and spring snook fishing, as well as good boat ramps.

The upper section is mostly freshwater, depending on the rainfall and has some holes on outside bends that dive down to as deep as 18 feet. The shores are lined with mangrove and cypress. Snook take kindly to fresh water and in the winter, they're looking for the deep and stable holes.

Look for Snook Haven Fish camp, classic backwater river fishing. Fish the outside bends with soft, plastic jigs or hard plastic sinking plugs. The afternoon outgoing tide is good for the upper river; the U.S. 41 bridge is generally regarded as the dividing line between fresh and saltwater.

The Peace River, which runs about 100 miles from Lake Hancock, north of Bartow, to Charlotte Harbor is popular with canoeists, and also holds largemouth bass, bream and catfish. Stumpknockers can be caught on small, popping flies or small jigs and spinners, and saltwater species can be caught in the lower part of the river where tides come into play. Snook up to 30 pounds migrate from the harbor and can be caught year-round as far north as Fort Meade. Tarpon are also caught in the lower part of the river.

Fishing licenses aren't needed on charter boats. Otherwise, they're available at the Sarasota and Charlotte County tax collector offices or in bait stores.

• Riverwood Golf Club: In an area considered one of the top metro areas in the country for golf, Riverwood is almost certainly the best course in the Punta Gorda area.

It's a Gene Bates design that is thoughtfully laid out, consistently demanding throughout with a handful of spectacular holes. The conditioning is first-class and the green fees are very affordble. It's a course green as Ireland that will slap you silly if you aren't having a good day. Play it from the back tees for a treat; most architects design courses from the back, no matter what they say in public, and way back yonder is where you'll see all the elements Bates and God intended.

• Lemon Bay Golf Club is located at, obviously, Lemon Bay, a fertile fishing spot. It's barely longer than an executive course at 6,180 yards from the tips, and you never feel totally comfortable whacking it with your driver, but it's well groomed and friendly.

It has the southwest Florida look, in terms of all the water -- the ponds are all nice and symmetrical and well tended, with birds that look like they were placed there by the maintenance staff -- and palm and pine trees interspersed over the open and sometimes marshy ground. It's very well maintained, especially for a course that used to be open to the public, now gone semi-private.

• The St. Andrews South Golf Club is a pretty, open layout through a community with some ritzy houses, many of which have boats moored in their back yard canals that lead to nearby Charlotte Harbor. The course itself is dotted with ponds and lakes connected to these canals.

In the waterways, redfish, mullet, trout, snook, even tarpon swim and jump. It's enough to get an angler's blood pumping. It is said the feeding grounds are so fertile, sometimes the tarpon get so fat they can't make it out through the narrow pipes that connect to the canals. It would be a fisherman's paradise except for the single fact that fishing isn't allowed. The sportfish are there purely for show.

• Kingsway Country Club in Lake Suzy, just north of Punta Gorda, is a Ron Garl design that boasts seven sets of tees and some of the best greens in the area. 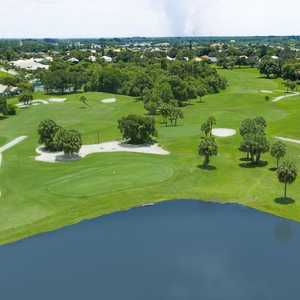 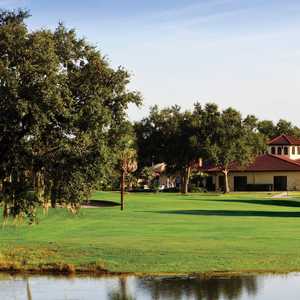 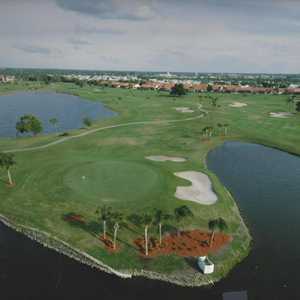