PALM BEACH GARDENS, Fla. — The fairways are huge, your caddie is at your side, Florida's warm winter winds are whipping through a shirt that has no chance of staying tucked and the possibilities seem endless.

The forced clear on PGA National's Champion Course is panic inducing. No worries. Only pros play it.
«

Maybe a chiropractor would disagree, but you're certain you are standing much straighter and taller than usual. Marching up and down the fairways of PGA National's Champion Course tends to do that for a golfer.

The best of PGA National's five golf courses, the Champion requires that non-members use a caddie and this is one rule we can all be thankful for.

Without it, a number of players would no doubt unwittingly deny themselves one great golfing pleasure. PGA National's Champion Course is a longtime setting for pro golf. A PGA Championship and Ryder Cup Matches have been held here. Now, it's host to the Honda Classic.

Regardless, it's a golf course that was made for Joe Schmoes to feel like pros.

Nothing brings that sense home more than having a caddie in those distinctive white uniforms lugging your bag around the course. You know, the bag that sometimes gets thrown down the stairs by your kids or stuffed into the garage for months at a time.

But you can walk like a pro at PGA National's Champion Course.

This is no minor deal. Hitting even a halfway decent shot — heck, just not tripping when you swing — feels 10 times better when you can follow it up by handing a caddie your club and stalk up to your next shot with your arms swinging free.

Nothing in your hands. Not a care on your mind.

"It's just cool isn't it?" a golfer who looked to be about 60-something chortled at the bag drop after his round. "I felt like I was back in grade school playing dress up or something. The caddie makes all the difference. You feel like you're playing in some tournament.

Thankfully, the Champion's fairways are wide enough to let average hackers tap into their inner He-Man. Jack Nicklaus just renovated the course for the third time, in part to give it more teeth against the PGA Tour players. Yet, it's hardly a course that just grinds down ordinary recreational golfers.

For one thing, it's very forgiving with a number of huge landing areas. Rather than take driver out of your hands as some courses do, this 7,048-yard track keeps pushing the big club into your paws.

Sure, if you step back to the tournament tees — and you want to step back, just to get a look — there are forced carries that could make the most dedicated golfer consider croquet. Especially No. 18. This water clear is more intimidating than global warming and it's only the start of a 600-yard, par-5 finisher.

You just walk right by that tee (it's not even marked for recreational play) with your caddy and take on a fun double dogleg back toward the clubhouse.

"Pity those buggers, eh?" Kevin McCaffrey, my caddie this day, snorts about the pros as we march by. McCaffrey is from the Bronx, but buggers just sounds better out of a caddie's mouth I guess.

And pity them indeed. That's one of the things that are liable to strike you during a round at PGA National's Champion Course: it's hard to imagine anyone nervously sweating their way around here while you're having this much fun. With its ultra green fairways, difficult but lush rough and redone bunkers, Champion Course is a blast.

At least for those not trying to make a living off their scores.

The course marketers try to make a big deal out of the difficulty of the 15 through 17th stretch, a run that in typical Nicklaus modest fashion has been dubbed "The Bear Trap." There's even a fancy plaque on a rock with a Tony Robbins worthy quote from Nicklaus near the 15th tee.

In truth though, these two par-3 water holes sandwiched around a par-4 dogleg water hole are a lark for a golfer who's taking in Champion Course's theater. Seventeen is the best of the bunch with a green that's hanging out into a swampy marsh with bright blue water. Walking up near the green, ducks come flying up out of the marsh too.

Bet the PGA Tour guys don't get that. Not with the crowds having already scared the wildlife away. It's just better to be an Average Joe walking like a pro at PGA National's Champion Course.

The Champion is a good walk enhanced. This is a virtual must-play in the Palm Beach region, even with its $241 high season greens fee and the extra dough you should be tipping your caddie.

It's that good of an experience, that enjoyable of a day.

From the first tee when you're looking down a pretty wide open fairway, with a real chance to lose a bad shot in the water left, this is a golf course that simply works. Whether George and Tom Fazio, the original designers, or regular revamp man Nicklaus deserves the credit for this isn't going to matter to you.

Champion Course isn't overrun by trees or houses. In fact, I noticed more houses looking through my pictures after the round than I did while playing it. And that's a sharp contrast to the other homes haven PGA National courses. You can get lost in your round here.

As long as you're walking. You need to be walking. There are carts available with forecaddies instead, but that option should be turned to only if there are health or physical limitations. For Champion Course is likely to be one the best four-hour walk you've ever had. 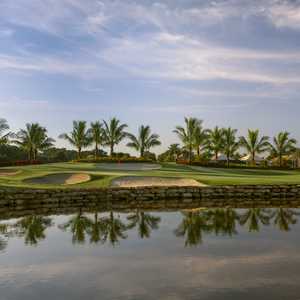 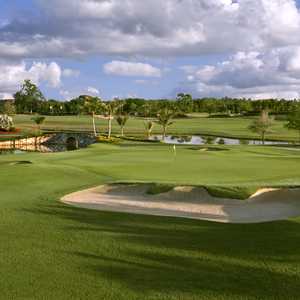 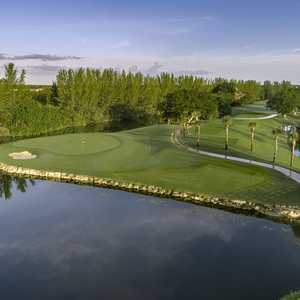