The Perry Golf and Country Club is one of those rural Florida golf courses with cheap green fees and, rare for Florida, no development around to cloud your golf thoughts.

The greens are the strong point at Perry Golf and Country Club.
«

PERRY, Fla. - On the way to the Perry Golf and Country Club, way past the last wisps of civilization, you pass cows, racoon hunters and open fields that look like they've never been touched by the hand of man.

It's so far out in the sticks, Jed Clampett would be lonesome. Perry itself isn't exactly a glittering metropolis, and its golf course is on the outskirts of nowhere. This is, after all, Taylor County, one of Florida's more rural districts, where only a few years ago men strode around town carrying firearms like it was the Wild West.

Suddenly, there's the course, beside yet another huge, empty field with nothing stirring but the crows. The club itself is sort of an oasis in the midst of all this beautifully wooded emptiness. There's a nice, spacious clubhouse, with a big-screen television, and fairly well stocked clubhouse.

The good thing about the club's isolation is that there is nothing man-made to intrude on your round - no houses, condos or traffic noise.

"That's one of the reasons I came out here," said Joel Thorpe of Tallahassee. "It's a lot different from the courses in Tallahassee. It's not as good, but it's cheaper and you feel like you're getting away from it all."

Indeed, there was hardly any noise except for the whirring of insects on an unusually warn February day and the chirping of birds, unless you want to count the old fella in the foursome ahead of me who for some reason kept screeching like a hoot owl.

And it is cheap, though not as cheap as some other nine-hole courses in rural, north-central Florida. Green fees are $25, including cart, but they charge $5 just to use the driving range in addition to $3 for a small bag of range balls. Members, of course, play cheaper.

The semi-private club was built in 1954, when it really must have been in the sticks. Or maybe time just left it alone out in the wilds.

As for the course itself, it's not bad. The best thing about it is the greens, which are small to medium-sized, most with good slope and undulation. Some of the pin placements can be difficult, and the greens are surprisingly fast.

On the day I played the course, the Bermuda fairways had just been aerated, with plugs everywhere, but overall, the conditioning was decent, for this price.

The course has enough to keep you interested for a few hours. It's short, at around 6,000 yards, and a couple of the par 5s would be par 4s elsewhere; the longest hole on the course is a 507-yard par 5.

But there are some tricky angles off the tee, and they've done a nice job of arranging the tee boxes so that most of the holes on your second go-round, if you're playing 18, play differently.

Being a short course with tree-lined fairways, you're required to manage your game here and to shape shots. It's best to stow the driver on some of the holes, like the short par 4s at Nos. 4, 12 and 13, the latter of which is drivable at 291 yards.

You'll be looking at both fades and draws off the tee on several holes, and if you don't play to the right spots in the fairways, you'll be hitting over or around one or more of the many tall pines to the green.

Most of the fairways are tree-lined with tall, mature pines, though most of the growth is on the perimeter, giving the interior of the layout an open feel.

The Perry Golf and Country Club is a decent play for the money.

If you're in Perry, chances are good you might be pulling an RV. There's a KOA campground here, with a 12-person hot tub. The Westgate Motel and Campground is another good bet.

For those willing to spend a bit more, consider the Eagles Nest Resort or the Keaton Beach Marina and Hotel closer to the Gulf of Mexico. 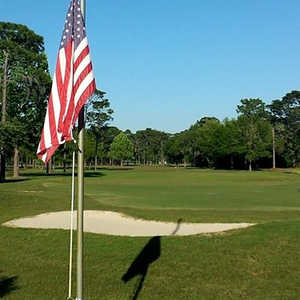