A Jacksonville golf landmark and the site of Ben Hogan's infamous 11, Hyde Park Golf Club is a minor Donald Ross masterpiece owned by a pair of former PGA Tour pros. The golf course maintains a community feel and a focus on the subtler aspects of the game. Oh, and green fees top out at just $38.

Bring your draw: Most of the doglegs at Hyde Park are to the left.
«

Hyde Park Golf Club was designed by famed architect Donald Ross. The layout is routed through stands of Southern pine and moss-draped Spanish oak trees. The traditional design has withstood the test of time, offering a challenging round for the Jacksonville Open, which eventually became the Players Championship.

JACKSONVILLE, Fla. - Hyde Park Golf Club is like one of those minor masterpieces in a museum you like to go back and visit every so often.

Let the crowds clog the queue to see the Mona Lisa at the Louvre. You can take your time enjoying John Vanderlyn's "Adriadne Asleep on the Island of Naxos."

Okay, sorry for the obscure and showy art reference. The point is, Hyde Park isn't the best-known design in the Donald Ross canon, but it has a lot of what makes his legion of devotees revisit his golf courses again and again.

There are the elevated, crowned greens, and the angles into them. The artfully and strategically placed bunkers. The old-school emphasis on strategy over strength.

Hyde Park has all that going for it, and more. Though some of the "more" is more prosaic.

"The thing I like about it is you can come out without a tee time just about anytime and get on," said Mark McGinty, a Jacksonville resident who often plays the course.

Not to mention that getting on this minor masterpiece runs only $28-$38. Some good things in life are still cheap.

Located in an old, shaded neighborhood on the west side of town, Hyde Park has been a Jacksonville golf landmark since 1925. I know people whose grandfathers learned to golf here.

Winding through Southern pines and Spanish oaks that provide merciful shade on the brutal summer days, the course has maintained its cozy informality since the Coolidge administration.

Not that it hasn't rubbed some ritzy elbows in its day. This was PGA Tour stop in the 1940s and '50s, home of the Jacksonville Open long before the Tour built its headquarters in tony Ponte Vedra Beach to the east.

Byron Nelson, Sam Snead and Ben Hogan all played here, and their photos still grace the walls of the tasteful clubhouse.

Former touring pros Billy Maxwell and Chris Blocker bought Hyde Park in 1971, and they've done a good job of maintaining both the course conditions and the community feeling.

Some of the holes the old masters used to play can still give you fits, and I'm not talking about Hogan's Alley, the par-3 sixth where the Hall of Famer once scored an 11.

From the tee box, you can't see the creek that cuts across the fairway at No. 3, for example, and the green at the 409-yard 15th slops hard back to water, as do a few of the other more-challenging holes. The good news is that practically anybody can reach most of the short par 5s in two.

Hyde Park is a great value for the green fees. It's very walkable, and you feel like you could be on somebody's shady back porch. Most of the neighborhood homes are behind fences or across the street, so it has a pastoral feel, though it is in a fairly busy section of the city.

The course itself is straight out of a museum, measuring 6,468 yards from the back tees - tiny now, but average-sized back then - with a 124 slope rating from the tips. You need to focus is on the subtler aspects of the game - namely, trying to get the crowned greens to hold your approaches.

There is precious little water, only some small creeks that cut across fairways at integral points and ponds that guard access to the greens. There are bunkers, of course, but they are relatively few and always there for a reason, nothing showy. The elevation changes are minor but still unusual in this flat part of flat Florida.

Bring your draw: Most of the doglegs tend left, and slicers will have a difficult time. As McGinty said, "It's a good course for somebody who likes to hook the ball."

The Hilton Garden Inn is a good, centrally located place, right off Butler Boulevard, which will whisk you to the beaches or downtown. It has a business center; free, in-room high-speed Internet; a whirlpool and a \fitness center. The rooms have microwaves and small refrigerators. 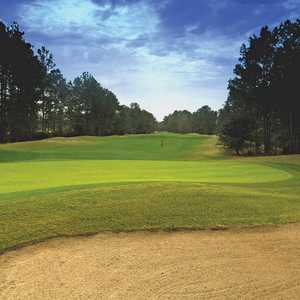