SARASOTA, Fla. - Every now and then you run into a golf course you've never heard of that surprises you, either for better or worse. The Harbourside Course at the Longboat Key Club is one of the former.

Maybe you've never heard of it because Longboat Key caters to a pretty exclusive crowd, even for well-heeled Sarasota. Then again, if you like to hobnob with the famous and moneyed, you may have played it.

It's a completely different track than the resort's other course, the 18-hole Islandside, with its old-time Florida look and feel. The 27-hole Harbourside isn't exactly an old-timer, though it opened in 1981, which is comparatively ancient for Florida golf courses.

Harbourside was designed by Willard Byrd, who is well-known throughout the Southeast, and noted Florida architect Ron Garl, a TravelGolf.com contributing writer, did a $2-million renovation in January of this year, rebuilding the putting surfaces, adding new bunkers and chipping greens and revamping the par-5 fifth hole to create a peninsula green.

In fact, they're still tinkering with that hole, probably the toughest hole of the three nines. They're going to extend it to a 600-yarder, making it even more difficult.

That's the theme of Harbourside, at least when it comes to comparing it with Islandside. Harbourside has a more modern look and feel, with better views of Sarasota Bay, but the biggest difference is it plays about 10 strokes harder. If you play Islandside first and expect more of the same at Harbourside, you're in for a shock, hombre.

"Challenging, definitely challenging," said Harbourside Head Professional Matt Neapolitano. "Especially the blue course. The aesthetics are really something, just because of the property it sits on. Islandside is more your typical island course. Here, you've got oaks and pines and better views."

And harder shots. The aforementioned No. 5 on the blue course wraps around a lake on the right. It's a classic risk-reward hole, where even a fat bank account won't let you cut too much off the water unless you've got the brawn to match. The water dips into the right side of the fairway, with bunkers left. You're hitting into a relatively small green that drops off into the water.

That hole is an anomaly. The course isn't overly long - none of the nines reach 3,500 yards - but it's tight, mean and wet.

"Bring a lot of balls," Neapolitano said. "Play to your strengths, especially on the blue. There's a lot of water out there, and other trouble off the fairway. I don't want to say it's target golf, but you do want to be straight."

This isn't classic, resort golf, with its easy-going ways. Harbourside doesn't recognize class distinctions and can be spiteful to rich, poor and middle class alike. Bring that straight shot with you.

"I actually like Harbourside more," said Ryan Thibodeaux, a high-handicapper who vacations often in the area. "It's harder, definitely, but I hit the ball straight. I've never hit it long, but I seem to do okay out there."

Harbourside has a more varied look than Islandside, with more of a marsh feel and different flora, other than the mostly banyan and palm tree-studded Islandside. At Harbourside, you'll see oak, sabal and fiddleleaf palm, fig, palmetto and your classic southern pine. Sarasota Bay is out there, too, though the marsh growth may block some of the better views.

Like Islandside, you will be playing through housing developments, though there are occasional glimpses of unfettered nature; the cart paths take you through some nice, mangrove swamps.

The dunes on several holes are a nice touch. Neither bunker nor waste area, they're classified as "abnormal ground conditions," and you can improve your lie, but not your position. I'll take abnormal every day with those rules.

The Longboat Key Club sits so close to the Gulf of Mexico you can hear the grouper groaning and literally see the wind blowing patterns over the saltwater. If you fell off the balcony, you'd almost land on the beach. The sun sets in your picture window like a painting.

It's an exclusive resort in an exclusive setting - Longboat Key is home to many rich and famous, and known for its literary lights: John D.MacDonald used to live here.

Water sports are the big deal here, with boating and fishing excursions available, or if you don't want to go that far, the resort has sailboats, kayaks boogie boards and snorkel equipment. If that's still too much activity, umbrellas and cabanas are available, or just lounge by the pool or sit at the outside bar and stare at the Gulf until another hurricane hits.

Longboat Key Club has no less than six restaurants and lounges, starting with Sands Pointe, with the broad sweep of the Gulf as a backdrop.

The Grill at Harbourside serves seafood and steaks for dinner and the Dining Room at Harbourside offers a buffet. Barefoots is the poolside lounge where you get the pink drinks with umbrellas, and Spike n' Tees overlooks the golf course.

If you want to make the short drive in to Sarasota, there is a wide variety of restaurants.

The revamped No. 5 hole on the blue course, when completed, will be known as the "Blue Devil." 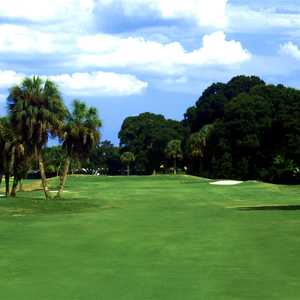 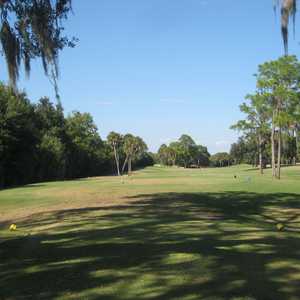 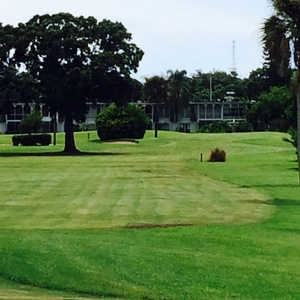