VIERA, Fla. - The Duran Golf Club has that new car smell: it looks and feels like something with zero on the odometer, something brand new and virtually unused, which it is.

Opened earlier this month, what few trees the course has are small saplings, supported by stakes and rope. There's no clubhouse yet, just a temporary trailer. Nor is there a practice putting green, which can be rough because the greens here are fast and take some getting used to.

Much of the course, both its interior and perimeter, is naked dirt staked out for the new homes that will eventually be built. The sites are so popular that potential owners have to jump in a lottery and take whatever they get.

When you tee off in the early morning, even the dew on the fairways gives it a new, Christmas morning look, even though it's already 80 degrees and climbing. On a hot, midweek summer day, there are few people on the course, heightening the fresh feel.

Duran is the new facility for the master-planned community of Viera, near Melbourne, a former sod farm. Duran is the brainchild of the Dudas, the Czech family who began building the town in the 1980s.

It includes residential and commercial properties - such as a Wal-Mart Superstore and Super Target, as well as nearby amenities like Space Coast Stadium, which seats 8,100 and is the spring training home of the Washington Nationals. It also includes wildlife habitats, conservation areas, nature trails, lakes and parks.

And now, it includes a golf course - one that will most certainly be ranked among the best of the Space Coast and maybe the best.

"Oh definitely, tops," said Mike Floyd of the Space Coast Golf Association. "It's between this and the Majors (at Bayside Lakes). Duran is going to rank No. 1. They've put a lot of money and attention to detail into it. I think it will overtake the Majors and Bay Tree this year or next."

The course will improve with a little seasoning, but even right now it is a terrific play. It was designed by Louis "Chip" Powell, an architect with experience in courses in planned communities. Powell also designed the Renaissance Golf Club in Sun City, Fla.

It has good length at 7,150 yards and its fairways and greens are wide like the huge piece of property it sits on. You have to work to get into trouble at Duran, which was the idea.

True enough, but Powell started to get cute around the greens. The greens are large, but sloped and undulating - and of course, fast, rolling about a 10 on the stimpmeter. Some are elevated and, like the fairways, have a lot of movement - they moved over a million cubic yards of dirt on this flat land.

"Actually, we slowed them down from last week," Tomzak said. "The challenges were built in and around the green surfaces. There are wide collars - you can be off the green 20-25 yards and still be putting. There's scoring opportunities for everybody."

Every course official in the world will tell you their course is "challenging for all levels," but Duran succeeds in this more than most. From the back and most of the middle tees, there are enough forced carries over water, marsh and waste areas to make the weak-kneed weaker.

But, from the forward tees, it's a different ballgame. It can be a brute of a course from the tips, but it should also be women-friendly.

"From the forward tees, there are no forced carries," Tomzak said. "We wanted to make sure the average player could move the ball around and not have any of these five- or six-hour rounds."

It doesn't end there. Most of the greens have wide collars and surrounds, so even if you miss, there's room to recover.

There are also plenty of bail-out areas. It's a course where you can be aggressive off the tee and on your approach, without having to worry too much about getting yourself into trouble. Easy, I can hear you salivating.

Still, there is quite a bit of water, some nasty pot bunkers and there are some holes that will make you question your manhood. No. 18 requires a very accurate and long tee shot over the water that runs down the left of the hole. From the tee, it looks like the landing area is small, backed by bunkers, but it is an optical illusion; there's a great deal more room than you first think.

The facility is in the process of completing an expansive practice facility. It will have a targeted driving range, with coquina shell bunkers, with an executive course built around the perimeter. The whole practice facility will be lighted for night play.

Green fees at the daily fee course are $44-$77 for Florida residents, depending on the season, and higher for non-residents.

The Courtyard by Marriott is a good place to explore Space Coast Golf. Centrally located not far off I-95, the hotel has 146 rooms with free, high-speed Internet access. It also has a heated swimming pool, whirlpool and exercise room.

The Courtyard by Marriott has a breakfast buffet and there are a number of restaurants nearby. Along with the usual fast-food assortment, there's also The Primavera, Sun Shoppe and Café, Bone Fish Willy's, Lucky Garden and Fiesta Azteca Mexican Restaurant - any of which are good bets.

The course's opening was delayed by the hurricanes of 2004. 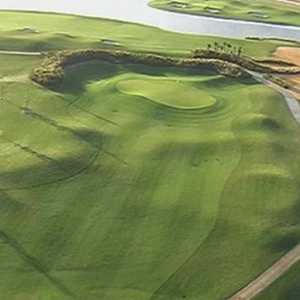 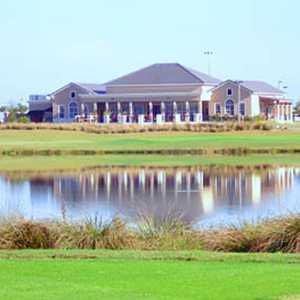 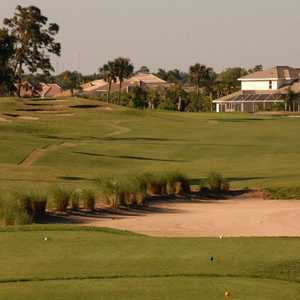