BROOKSVILLE, Fla. -- Living up to comparisons to two of the world's finest golf courses would seem impossible for a fairly new facility, but World Woods Golf Club does more than hold its own.

Watch out for the deep sand bunkers on the Pine Barrens course at World Woods G.C.
«

The Rolling Oaks Course provides the second world-class layout at World Woods. An entirely different, yet no less enjoyable experience than playing Pine Barrens, this course's name also gives clue to its design.

The club, which opened in 1993 near Florida's Nature Coast in northwest Hernando County, is home to two distinctly different, but truly dynamic golf courses -- Pine Barrens and Rolling Oaks.

World-renowned architect Tom Fazio carved the two courses out of the oak grove and pine tree forests just off of Interstate-98 (Ponce de Leon Blvd.) about an hour's drive north of Tampa Bay. Although young by golf course standards, the two are drawing rave reviews and some astonishing comparisons.

With its large, sandy wastelands and long carries off the tee, Pine Barrens is favorably compared to New Jersey's Pine Valley, which is generally considered one of the best golf courses in the world.

Rolling Hills, with its traditional layout of rolling hills and tree-lined fairways, is sometimes mentioned in the same breath as Georgia's Augusta National, home of the Master's. Add to the mix Florida's year-round sunny weather and one of the nation's largest practice facilities and World Woods becomes a must play for any golfer. Fazio considers the two championship layouts some of his best work.

Both courses have been ranked by various publications as two of the best public courses in the country. Golf Week ranked Pine Barrens No. 13 on its list of "America's best modern courses" and Rolling Oaks was 67th in 1997.

Pine Barrens, a par-71 that plays 6,902 yards with a rating of 73.7 and a slope of 140 from the tips, is as scenic as it is difficult. Fazio took advantage of the native sandy soil, giving the course almost a desert-like feel. Others say it's like playing on North Carolina or Pennsylvania's rugged terrain.

All of the bunkers at Pine Barrens are considered waste bunkers, not sand bunkers, because bushes and trees also grow in many of them. Although hitting out of them can be impossible at times, golfers do have a slight advantage in that they can ground their clubs in a waste bunker before hitting, giving them a better chance to chip back into play -- something they can't do in a normal sand bunker. The carts carry a rake and a club scrubber to help with the clean up after a sand shot.

Golfers who have trouble hitting the ball straight might have a long day here. Fortunately, two of the course's easiest holes start off the day. Hole No. 1, a 371-yard, par 4, features sand that runs almost the entire length of the hole on the right side. The second hole, a 428-yard dog-leg left, does the opposite, with a ton of sand to the left.

No. 3, a 146-yard par 3, is supposed to be the easiest hole on the course, but it has hidden tricks. If you clear the pond and avoid the back bunker, the undulating green can force a 3-putt.

No. 4, an uphill 480-yard par 5, might be one of the most beautiful and treacherous holes you'll ever play. An expansive valley of barren wasteland sits to the right. A finger-like projection from the valley runs near the landing area off the tee. A 200-yard shot to the left of it puts you safely on the fairway, although it takes you farther away from the hole, but a 230-yard shot will carry it. Play this one smart and you'll escape with par.

The fun continues over the next couple holes, but it really picks up on No. 12, the course's No. 1 handicap and the start of a stretch of three of the course's longest holes. This 457-yard par 4 has two greens -- one that's easy to reach on the left and an incredibly tough one to the right up a steep hill over another wasteland. The two play off the same fairway with yardage markers to both along the way.

After another 421-yard par 4, comes the tightest and longest hole, a 527-yard par-5. Stay right to avoid a sandy confrontation. No. 15, a short 313-yard par 4, has another testy gimmick -- two fairways. The one to the left is wide open, but the one to the right challenges a golfer's ego with a 220-yard carry. Either way could bring birdie.

Although not an easy course by any stretch of the imagination, Rolling Oaks is gentler on the ego than Pine Barrens. This par-72 plays 6,985 yards with a rating of 73.5 and a slope of 136 from the tips, and 6,520 yards with a slope of 131 from the back tees.

Its flowing fairways are devoid of carries and their aesthetic beauty enhances the experience. Rolling Oaks' scoring traps are more conventional -- cavernous fairway and green-side bunkers and large greens with multiple tiers.

The third hole, a 519-yard par 5, is a striking image with eight bunkers along the right side of the fairway and two to the left. The next three holes all require blind drives to exact locations for a shot to get on the green in regulation.

No. 8, a downhill, 148-yard par 3, is easily the prettiest hole on this course. A flowing stream to the left connects with a pond below the hole. If you miss, hit it long. Stay right to avoid the pond on No. 9, the course's longest par 4 at 437 yards.

Beside the wonderful golf courses, World Woods boasts the nation's No. 1 ranked practice facility, according to Peterson's Golfing Report. Fazio created a 22-acre circular driving range home to eight separate teeing areas, target greens, bunkers and trees, as well as practice bunkers and chipping greens. The circle was created for the serious golfer who wants to test various wind and sun conditions.

Golfers can also tee it up at three practice holes -- a par 3, 4 and 5 to get them physically and mentally ready for the tough challenges that lie ahead. Fazio didn't stop there, either. A 9-hole short course, with seven par 3s and two par 4s (it plays 1,842 yards), will test a player's iron game, and a two-acre putting green, with some nasty undulations, can rattle even the most seasoned putter. 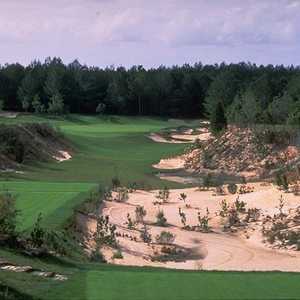 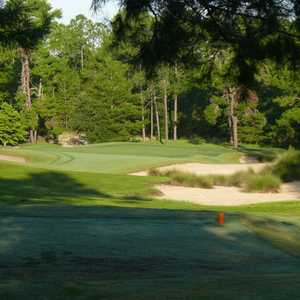 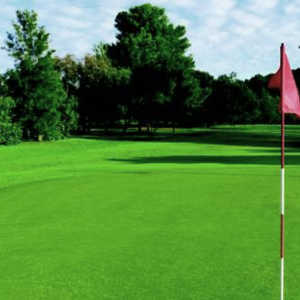