CLEARWATER, Fla. -- In a state that depends on tourism to survive, customer service is everything.

The approach on the 10th hole at Cove Cay Country Club is a carry over water with Tampa Bay in the background.
«

Cove Cay Golf Course is situated along Tampa Bay, its location offers scenic views throughout the course as well as abundant wildlife, several varieties of native birds call the course home. There are four sets of tees available with the longest measuring just over 6,000 yards. It's a layout that will appeal to players of all skill levels, from beginners to low handicappers.

And Cove Cay Country Club, situated right on Tampa Bay, provides some of the best customer service you can find among Tampa Bay golf courses.

Cove Cay's staff members are quick with a helpful hint, especially for golfer playing the course for the first time. Another appreciated touch: When you call for a tee time, the pro shop staff will automatically let you know the shape of the course, whether it's being aerated or seeded. In an area with this many golf courses, it's the small things that make a difference.

The course itself, while not among the top shelf of Tampa Bay tracks, is challenging. At only 6,161 yards from the tips, it doesn't play long, but water comes into play on most holes and, when it doesn't, trees make up for the difference.

"We like this course and we think the greens are great right now after the renovations," said Cove Cay Director of Golf Bill Armstrong. "We do our best to accommodate and we think we do a great job. The course is playing great and we like what has been done to it."

The course starts off with three dry holes. They aren't deadly, but don't be teased by the lack of water. After two fairly benign opening holes, the third is where Cove Cay, makes its mark. It's a 540-yard par 5 with a severe right-to-left dogleg. A bunker at the corner and a spruce tree in the middle of the fairway makes it almost impossible to for the green in two.

It is followed by the 389-yard par-4 fourth that is fronted by water and plays to a narrow and small green. For the rest of the round, you will encounter water on every hole.

"The course might not be long, but it has its defense," Armstrong said. "It's a tough course if you don't play it the right way."

For most of the holes, just keep the driver in the bag. On No. 8, it's only a 369-yard par 4, but there's water fronting the green and to the right.

Cove Cay's 10th hole plays to a par 4 or a par 5, depending on the tee boxes that day. It goes 451 yards and looks reachable in two, but there is another severe dogleg left and there's water all down the left side and fronting the green.

No. 15 is another monster. It only plays to 364 yards, but it's another severe dogleg left. It isn't worth trying to cut off too much with the drive because, right at the turn is a huge fairway bunker. Keep it safe, go with a long iron off the tee and a short iron home.

Cove Cay has four holes with severe doglegs, and three of them play from right to left, so work on the draw at the Cove Cay practice range.

Cove Cay isn't one of the more high-profile courses in the Tampa area, but it's worth the time, especially given the low cost. It has a loyal following and is right off the main strip of highway that runs through Clearwater.

"For the cost and the service, I can't think of anything better around Clearwater," said local golfer Joe McLain. "It's not long, but it has its quirks."

This isn't one of the more challenging courses in the area but it provides plenty of tests. Keep the driver in the bag, and remember: The approach shot means everything here. Coming off renovation, the greens roll true. But again, where Cove Cay really stands out is with great customer service. 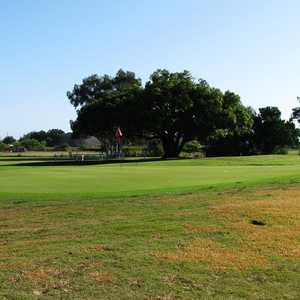