TAMPA, Fla. -- If you follow college football, you know that the University of South Florida is becoming somewhat of a player on the national level. The Bulls beat Notre Dame in the season opener this year and have been to bowl games the past six seasons.

The Claw at University of South Florida

In other words, the school is becoming a college football power, which means that its home games are attracting thousands from fans all over the nation.

If you come down to USF for a football game or are just in Tampa, The Claw at USF is a championship layout just off the college campus.

The Claw is a great course to get a good start on a Tampa golf junket, just minutes from the airport, surrounded by plenty of fine lodging and great restaurants. You can bring the kids; it's only five minutes away from the Busch Gardens theme park and about 20 minutes from Raymond James Stadium, home of the USF football team (as well as the Tampa Bay Buccaneers).

Anyone coming from a rival Big East school who wants to see their team -- and wants a nice round of golf -- needs to spend their football Friday at The Claw before a night at any of Tampa's restaurants. Stop by early for a day of golf, then a day at Busch Gardens.

"We are tough and fair, but we also like for anyone to come out and play," Roberts said. "We are aerating right now, but the course is still in great shape, and we welcome everyone. We aren't too long, and the greens are always in great shape."

It might be the official course of USF, but everyone is welcome, and the prices are lower than most of those in the Tampa Bay region.

With so many courses in Tampa Bay -- more than 300 over the eight-county region -- the course is close to the airport and a great way to prepare for some of the more difficult and scenic plays in the area.

The Claw, managed by Billy Casper Golf and designed by golf architect William Mitchell, opened in 1967 and is a throwback to old Florida golf where water doesn't come into play on every hole and the greens are still treacherous.

The Claw at USF: The course

It isn't as demonic as some of the better-known courses in the Tampa Bay area, where errant shots cost you two strokes, but it has its share of obstacles.

The real trouble comes into play on the third hole, a long par 5 that has a tight fairway and water on the left if you really crush the tee shot. Trees line almost every hole at The Claw on both sides, so there's little margin for error if you spray your tee shots. The greens are mostly large and do not have much undulation, so the drive is the most important part of each hole. Keep it straight, and a safe approach and two-putt can make for an easy round.

No. 9 is a 422-yard par 4 that has water all the way down the right, but playing it safe by staying to the left is the right way to go. It is long, but don't try to blast it off the tee. Take it safe, lay up and settle for par.

The back nine is shorter by far, but look out for the tricky 14th. It's a 538-yard par 5, the longest hole on the course and a sharp dogleg left. There are trees on both sides, so going for the green in two is dangerous. The 14th is the last major hurdle, because The Claw gives you some breaks down the home stretch.

The Claw isn't one of Tampa Bay's most well-known golf courses, but with its majestic oaks, towering cypress and pine trees, it's a great place to start off a few days of a Tampa Bay golf trip.

"We always start off here before playing some of the other courses," said Joe Dokow, of Akron, Ohio, who was in town for the USF-Cincinnati game. "It's a nice warm-up, and they treat you well here, plus it's close to the airport, so we can get here as soon as we get off the plane."

The Claw is home to the nationally ranked USF men's golf team and USF women's golf team, and the newly revamped Rocky's Sports Grill provides a great 19th hole. Other amenities include a grass-tee driving range, a learning center and a large putting/chipping green.

The Claw at the University of South Florida: The verdict

The Claw is a tough course that is a great start to a Tampa Bay golf junket.

It might not be the highlight of the week, but it is a great warmup to some of Tampa Bay's higher-profile courses.

If you are a Big East football or basketball fan and find yourself at USF for a game, make sure to check out the Claw. 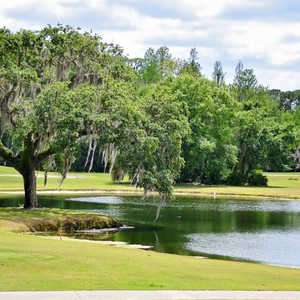 The Claw at University of South Florida
Tampa, FL
Details Book from $10