JACKSONVILLE, Fla. - When Joe Flynn, the starter at Windsor Parke Golf Club, says it's a tough course, he's not kidding.

The second hole at Windsor Parke Golf Club points the tee boxes toward a solitary tree that will shield approach shots.
«

Windsor Parke Golf Club in Jacksonville has the distinction of being one of the top 100 golf courses in Florida. The course is conveniently situated between the beaches and downtown Jacksonville and just minutes from the airport. Arthur Hills designed the course, utilizing the rolling terrain to incorporate the dramatic elevation changes that are the hallmark of his courses.

Designed by Arthur Hills and opened in 1991, the golf course stretches more than 6,765 yards from the tips, meandering discretely past some pretty nice homes. It gives homeowners their privacy and provides golfers a nice trek through nature without worrying about incoming balls careening over from the next fairway.

In purely Hills fashion, the object, and the challenge, is to get to the green. Thankfully, Hills lets up on the pressure once at the green. Windsor Parke Golf Club's target greens aren't massive and are sloped more for drainage than to punish golfers.

"It's a Hills course, so he opens it up laterally and guards OB with mounds and trees," said Mark Heeter, head golf professional. "And he'll have a tree somewhere" on the hole that will come into play if you didn't plan for it and work to avoid it.

"Every hole offers something that can get you into trouble," Heeter said.

The turf is all Bermuda, which provides sticky rough, lush fairways and smooth, fast greens.

The front side of Windsor Parke seems to dole out the most trouble on the even-numbered holes. Hills' trademark tree appears on No. 2, with a lone tree stuck into the right side of the fairway. Get on the wrong side of it, and you'll be punching a shot toward - but not on - the green.

The fourth hole at is a bear of a dogleg left that bends around water without any protection from it. A bad bounce or a rambunctious roll will end up wet. There's only a narrow landing area between the water and a row of bunkers on the right side.

Windsor Parke Golf Club's sixth hole provides double trouble with water in front of the green and an interrupted fairway.

The eighth hole's contribution? Length. Only a par 4, it ranges in length over the five tees from 351 to 444 yards. Getting there in two is going to be a tall order for just about anyone.

Windsor Parke Golf Club: A little bit of everything wet on the back

An interesting aspect of the back of Windsor Parke is its pace. Two of the first four holes are par 3s, both beautiful holes over marsh.

It was that double dose of par threes that prompted Heeter to reverse the nines about two years ago. "It was to speed up play," he said. "Those short holes really bunched it up right off the bat."

The back starts with a nice cruise through the trees until water appears at the green on number 14. Get used to it. Water is there to stay for the rest of the round.

Fourteen and 15 are humbling holes. Fourteen has a string of bunkers on the left side, where the fairway slopes, so they are certainly hazardous. Water nearly surrounds the green once you get past the sand.

Windsor Parke Golf Club's 15th hole is a lot of fun, with water up the entire right side and an interrupted fairway right before a water carry to the green. Distance and location have to be precise to survive this hole.

On sixteen, Hills seems to have been distracted because the fairway comes and goes, with rough in between and wicked side slopes the entire length.

Brian Lit, of Tampa, enjoyed the golf course. "It's a fair course with a lot of challenging driving holes," he said. "It's nice that it's lined with trees instead of houses."

Peter Flaherty, of St. Petersburg, found the course on the Internet and noted that players' reviews were positive: "And the price is unbelievable."

"It's in impeccable condition, and the greens are phenomenal," Flaherty said.

Lisa Allen is a golf, travel and business writer based in Beaufort, S.C. She has edited newspapers, magazines and books in Michigan, Indiana and South Carolina. Follow her on Twitter @LAllenSC. 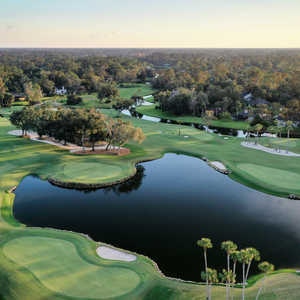