ODESSA, Fla. -- You get two courses in one day at The Eagles Golf Club, a 36-hole complex just outside of Tampa. The two are completely different from one another, but water comes into play on most holes. Enjoyable for golfers of most ages -- and set between tougher courses such as TPC Tampa Bay and Westchase Golf Club -- The Eagles offers a bit of a reprieve for anyone traveling to the area.

The par-3 17th on the Lakes Course at The Eagles Golf Club plays to 232 yards from the tips.
«

There are two championship courses available at Eagles Golf Club, the Forest and the Lakes. The Lakes is the longer of the two golf courses at over 7,000 yards from the back tees. It has a more traditional Florida design than the Forest.

The Eagles Golf Club is one of the most popular public golf facilities in the Tampa area. The club offers two championship courses, the Lakes and the Forest, that each provides a different experience. The Forest Course is the shorter of the two at 6,719 yards, but it's no less challenging.

Located about 25 minutes from Tampa International Airport and about a half-hour from Clearwater Beach, the Eagles is snuggled inside a sprawling housing community, and, yes, the homes can come into play. Keep it inbounds or spend your next shot shooting out of someone's shrubbery. Hint: There are a lot of kids who live at The Eagles, and they come into play, also. An errant tee shot on a recent Saturday almost beaned a couple of kids jumping on a backyard trampoline.

The Eagles is great for scouting out wildlife as well. On a recent late Wednesday afternoon when the sun was going down, at least 15 deer were roaming the seventh fairway on the Forest Course. As the golfing communities in Florida grow larger, the lack of space for wildlife gets smaller. Don't be surprised to see some alligators wandering the many banks on the Lakes Course.

Both The Eagles' Forest Course and Lakes Course present different challenges. As their names suggest, you can find more trees on the Forest and get wet on the Lakes, but there are equal opportunities to find both hazards on both courses.

"The Eagles is a challenge for golfers at any level," general manager Paul Holden said. "It doesn't matter the handicap, just have fun. It's in great shape, and it offers two distinct courses that offer different challenges both times. You can park in the same space and feel like you just played two separate facilities."

The Eagles also adds a new meaning to the term "shotgun start." It is adjacent to the Silver Dollar Shooting Club, and often golfers on the Lakes course will hear a gun blast going off in the background. If you think Tiger Woods' caddie, Stevie Williams, gets a little excitable when a camera shutter goes off, he would go ballistic here.

The Eagles Golf Club: Two to choose from

Tampa's Gary Koch teamed with Rick Robbins and legendary Florida golf course designer Ron Garl to build the Forest Course, which is the tougher of the two courses, even though it plays to only 6,700 yards. There's water down at least one side of the Forest and the sixth hole is a long par 3 modeled after the 17th hole at TPC Sawgrass with its island green.

Both sides start with a par 5 that is reachable for long hitters, but bunkers that will eat up anything short surround most greens. You can score at The Eagles but only if you stay in the fairway. The third hole, for instance, is a short, 311-yard par 4 that can be reached on the drive by any bombers, but you have to keep it left and straight, or you'll be wet or in the sand.

The Lakes Course lives up to its name. Water isn't just something that looks pretty on the scorecard; it comes into play on almost every hole. As with the Forest course, both sides start with par 5s that can be reached in two, but you risk it at your own volition. With two par 5s over the first four holes, it's a tough start, and it doesn't get much easier. Playing at 7,100 yards, it makes a dwarf out of the Forest, but getting through the back nine is the toughest part. It gets a lot easier down the stretch.

The pro shop is well-stocked and the Eagles Restaurant is a great way to take a break between the two courses. Check out the chili with cheese out on the veranda overlooking the 18th hole.

The Eagles Golf Club: The verdict

The Eagles is popular among locals and is one of the most affordable courses in the Tampa Bay region. It's challenging without being unfair, and playing from the shorter tees to warm up for some of the other Tampa golf adventures makes it a fun course to play.

Tampa residents Kyle Waller and Jimmy Tuman play The Eagles often and say they have never been disappointed.

"We can pay $100 to play a lot of the courses around here, or we can spend a lot less," Waller said. "Some of the other courses are more well known, but this is a fun course. I'd recommend it, especially the Lakes."

Tuman agreed with the value, but said he prefers the Forest Course.

"It's nice to come out late in the afternoon and just enjoy the round and the wildlife," Tuman said. "You can't beat this place. I'll keep coming."

The Eagles has an aqua range and Holden provides lessons.

If you are taking a golf junket to Tampa, The Eagles Golf Club is a nice place to take a day off from the more difficult tracks in the area. Two challenging courses at the same club and some nice lunches to choose from between rounds makes for a good afternoon. 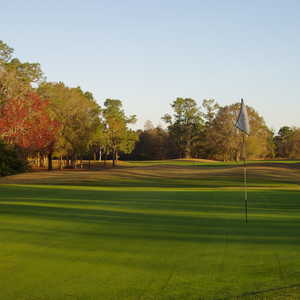 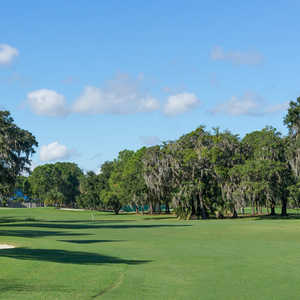 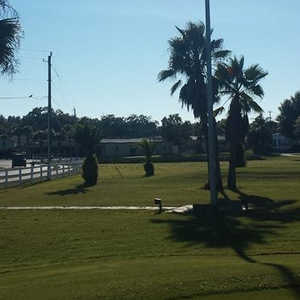