PORT ST. LUCIE, Fla. - The Wanamaker Course at PGA Golf Club could make a Buddhist monk on a vow of silence let out a scream of Andrew Dice Clay obscenities as he snapped his 7-iron in half.

Wanamaker's ninth green puts you back by the clocktower clubhouse.
«

This newly renovated Tom Fazio design in the sleepy Florida town of Port St. Lucie is that wicked. Its course symbol should be horns and a sickle rather than the quaint clock tower top used by this PGA of America-owned golf club.

The Wanamaker Course is the most difficult of PGA Golf Club's three golf courses and serves as the tournament course, according to Head Professional David Trout. There's also another Fazio (Ryder Course), and a Pete Dye course.

"It's a true test of golf that will give golfers a lot of obstacles," Trout said.

And a near figurative kick to the groin.

Take No. 13. This 546-yard par 5 took our twosome 27 minutes to play. Twenty-seven minutes on one hole — and it could have been 27 hours if we insisted on playing until we had pars.

Heck, even Dye might consider this hole a little extreme.

There's water along the right and huge tilted bunkers left. In fact, like many on Wanamaker, the whole fairway's lopsided, leaving you with many lies as even as the Tower of Pisa.

The first bunker on the left is so big it could swallow three elephants at once. Even more sand lurks near the green. It's a minefield of huge, huge bunkers.

"I felt like I needed a cigarette after playing 13," vacationing golfer Ralph Flesher said. "And I don't even smoke."

The Wanamaker sneaks up on you like heart disease. It's not a course that carries a well-known reputation for being tough, which makes it all the more imposing. You're not expecting this type of battle, especially not in Port St. Lucie.

This writer found Wanamaker Course much more taxing than the recently renovated Champion course at PGA National in Palm Beach Gardens, the one that gave PGA Tour pros so much trouble in the Honda Classic.

The 140 slope rating from the back tees reveals little. The true tale comes in the 137 rating from the second set of tees and the 133 from the third. There's nowhere to move up to find relief.

You could throw your ball right on Wanamaker's greens and still face a daunting challenge. Fazio's putting surfaces here are big and full of breaks.

The one on the par-3 fourth is slightly larger than Saddam's Baghdad palace. Welcome on! Now your adventure really begins.

Wanamaker's pain figures to be even more enjoyable once the conditions improve. The renovation, which redid many greens and bunkers, stands as an important step in this direction. The next will be smoothing things out in some shaky fairways.

"The conditions are actually better in the fairways at the PGA Learning Center," regular John Dowsett said of the nearby 35-acre shrine to practice also owned and operated by the PGA of America. "Go figure."

This actually figures well for Wanamaker. The PGA has shown it can make its practice facility second to none in the world and that committment to conditioning should soon carry over to the golf courses. Another promising sign is the PGA of America is not trying to bury criticism.

Over the past few months, the official Website of PGA Village has featured several honest quotes from PGA Professionals on what must be done to take the golf courses to the next level. There's also no attempt made to hide problems of the past.

When a golf course is honest about its problems, golfers can usually be sure they are going to be righted.

Now, the problem of all the big numbers on your scorecard at Wanamaker are yours to fix. Being an acrobat might help. No. 7 has a bunker that's almost straight up in the air on another tilted fairway. You can hit the ball in spots on this course that will force you to make the most unconventional swings ever.

Wanamaker makes you truly mull over when you're going to go for it. Because going for it and miss hitting is sure to be punished.

Then again, Wanamaker has its moments of unexpected beauty too. While looking for a ball on No. 7, you might peer into the water and see a host of mussels instead. That's sort of neat.

Wanamaker isn't a perfect golf course yet, but it's getting better and is worth working into a Florida golf trip. This can be one tough slog over 7,102 yards, but you'll learn plenty about the state of your game.

Your friends might not be wowed when you tell them you took on Wanamaker Course now, but just wait a few years. The word's bound to get out on this Fazio and it will assume its rightful place as one of the Sunshine State's feared beasts. And you'll have gotten to play it before the hype — and crowds — set in.

It's hard to imagine anyone having problems with pace of play here. There were so many marshals out on the course that they could serve as Port St. Lucie's private militia and no one would dare invade. And this was on a slow early morning when groups came few and far between.

Wanamaker is the most Florida-like of PGA Golf Club's three courses. There are marshes, palmettos, condos and construction. Bulldozers literally piled up dirt right to the edge of the ninth tee box on this visit. Once you start shooting back toward the clubhouse, you don't have time to dwell on that though.

Hilton Garden Inn Port St. Lucie is a new hotel minutes from the golf courses' clubhouse and right across the street from the PGA Learning Center.

It turns out to be an easy hotel to love in an area without a lot of them. The rooms are very nice, the staff's super courteous and there are tons of extras like laundry machines for guest use. Click here for online reservations.

There's a Sam Snead's full of golf memorabilia right off the lobby of the Hilton Garden Inn.

Not far away on the main drag of Port St. Lucie, skip all the fast food chains and hit West End Grill for some often inventive cooking. Just be sure you know what you're in for when if you order the corned beef sloppy joe.

Wanamaker Course was formerly the South Course at PGA Village. The name change is in honor of department store tycoon Rodman Wanamaker, who inspired The PGA of America's creation in 1916. 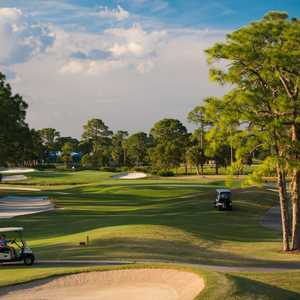 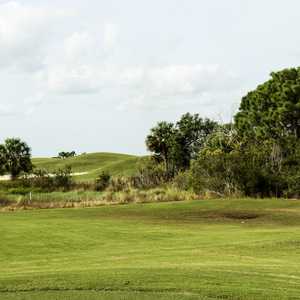 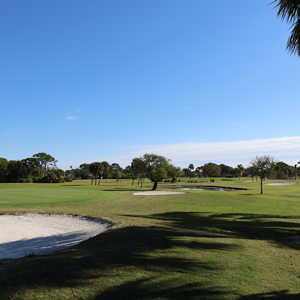