The Copperhead golf course at Innisbrook Resort: One of the best gets even better

PALM HARBOR, Fla. - It's hard to believe that Innisbrook Resort and Golf Club's world-famous Copperhead Golf Course could get any better, but it just did. The championship course, located just north of Clearwater off of Interstate-19, received a $500,000 facelift just in time for the JCPenney Classic in December, a tournament that pairs PGA and LPGA players who compete for their favorite charities. The recent announcement that the course will host a new PGA Tour event on Oct. 16-22, 2000, spearheaded the changes.

A view of the Copperhead Course at Innisbrook Resort and Golf Club.
«

The famed Copperhead Course is the crowned jewel of the 72-holes on the Innisbrook Resort property. The difficulty doesn't stop with elevation changes and pine tree-lined fairways. The golf course is muscular and open, playing more than 7,200 yards from the back tees.

The renovation refurbished all 18 greens, including an expansion of the 18th green to accept longer iron shots. One of the finest Bermuda putting surface grasses known as "tif eagle" was planted and the greens' irrigation system was modernized. Also, several bunkers were rebuilt and numerous tee boxes were lengthened.

A continuous cart path was added with an emphasis away from play to protect the fairways playing surface prior to scheduled tournaments.

The course reopened for play on Sept. 12 and continues to be the pride of the central Florida golfing scene. "The Copperhead has always been a great test of golf and the renovations should make it one of the top venues on the PGA Tour," JCPenney Classic tournament director Gerald Goodman said.

Even if you haven't played the course, you might recognize it. Several golf video games and simulators have given people a chance to play it wherever they live, but there's nothing like the real thing.

Golf Digest ranked the Copperhead as one of "America's Top 50 Resort Courses" and the 23rd-best course in Florida in 1997. The course is characterized by pine tree-lined fairways and rolling hills, more reminiscent of playing in North Carolina than Florida.

Hole No. 1 begins with a bang - an intimidating 535 yard par 5 (all yardages are from the 6,705 yard gold tees). Try to avoid the three bunkers within reach off the tee, then the hole climbs slightly uphill to the right. Two more bunkers guard the green.

The par 4, 435 yard third hole doglegs to the left between two large ponds, which will make you think twice about both your first and second shot. After a bunker-laden 165 yard par 3, another uphill par 5 awaits. Your drive must carry 150 yards over a water hazard on this 570 yard monster of a hole.

A tree planted right in the middle of the fairway or a bunker on the right side could hinder any approach shot to the green, which is nestled off to the left.

The sixth hole, a 440 yard par 4, forces a blind tee shot that must stay left. A long par 3 and a short par 4 will forgive any off-target attempts on the next two holes, but No. 9 won't. This 400 yard par 4 plays longer uphill with nine bunkers smattered about.

Seven more bunkers on a long, uphill, 420 yard finishing hole only reaffirms that this course was built with a PGA Tour event in mind. If you don't plop a ball in one of the 77 bunkers or nine different water hazards, you are a pro.

The Copperhead isn't the resort's only attraction, although it is the major headliner. Situated on 1,000 acres, the Innisbrook Resort also houses four other championship courses designed by Packard, the Innisbrook Troon Golf School, three golf shops, practice facilities and four upscale restaurants, such as DY's Steakhouse, Turnberry Pub, Inguana Cantina and Toscana.

The resort has 1,000 spacious suits to accommodate out-of-town travelers. Top-notch tennis and racquetball courts, a fitness facility, an elaborate convention center, six swimming pools, jogging and cycling trails, a wildlife preserve and a recreation center round out a full menu of entertainment options.

The Island Golf Course at Innisbrook is a par 72 course, which plays 6,999 yards with a slope of 132 and a rating of 74.1 from the tips. Similar in style to Copperhead, this course is also ranked among America's top 50 resort courses. And yes, water seems to be everywhere.

The par 71 Eagle's Watch (6,635 yards/72.0 rating/127 slope) is aptly named for the majestic birds that have nested on the property, including an eagle's nest that sits near the top of a tall pine to the right of the green on the par 5 eighth hole. The nest has been inhabited for more than 30 years.

The par 71 Hawk's Run (6,410 yards/70.5 rating/125 slope) has received several improvements, adding more bunkers and wastelands. Wildlife is particularly abundant on this course. Red-tail hawks swoop playfully on the back nine and Ospreys live on the lakes on holes 3 through 7, as do several alligators!

Lost Oaks, which plays to 6,700 yards, is the newest track. On-going construction promises that the resort keeps pushing to get bigger and better. Resort officials expect pro shops for the Eagle's Watch and Hawk's Run to be completed next year. A new health club and spa, with 21 treatment rooms, a lap pool and a fitness center, is also in the works.

Something exciting can be a daily occurrence at such a well-renowned place. When I visited the week after the JCPenney Classic, LPGA player Dottie Pepper was filming a commercial for Titleist golf balls on the Copperhead Course. 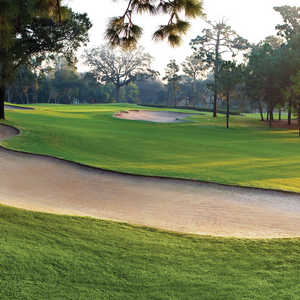 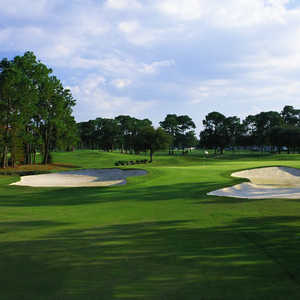 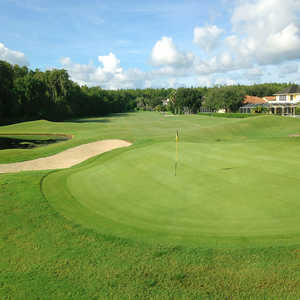